This current interactive blog based project debuted at Fluxfest Chicago 2017 and tracks responses to the "Is Art Dead? Money Talks..." project.

I am reworking this project from a new standpoint.  It will no longer be based around busking for money as a series of performances, though I may try that again in the future if it makes sense to do so (having moved to more rural Kansas it doesn't make as much sense right now).  Instead I am going to open it up as an interactive online blog project in the mail art network.

This iteration will debut at Fluxfest with 30 of each type of button offered to those who wish to participate, as well as surveys to fill out.  The idea is that each person can choose to take one or the other button, and then they email me photographs to post here.  Survey responses will also be posted here.

So it becomes more of an art world (or subverted art world) question and response as opposed to a purely public one...  If you are not coming to Fluxfest but would like to participate, contact me with your choice of button but be aware that there will be a nominal fee to offset making and mailing buttons because it can get expensive en masse. 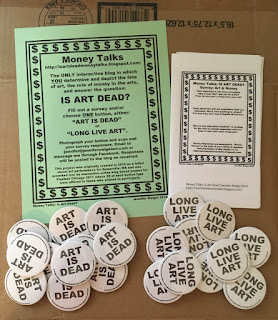 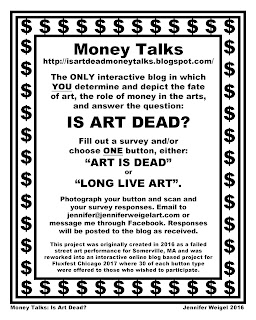 Posted by ChaoticBlackSheep at 11:08 AM No comments:

Email ThisBlogThis!Share to TwitterShare to FacebookShare to Pinterest
Labels: about

I was going to try busking today again in Davis Square outside of the ArtBeat festival, which opened in Seven Hills Park this evening, but there was already a good sized band set up.

Regardless I think I'm going to discontinue and backburner this project for now.  I had initially formulated it in response to the rapid gentrification here which is causing many artists to be displaced, but it's too close to home to things I'm struggling with personally between not finding work and not knowing how I'll be able to afford to live here, and people just don't know what to make of it.

And with the recent violence and overall feelings globally I'm just not able to connect with it right now at all anyway.  I'm feeling so heartbroken and out of touch and am losing faith in humanity for so many reasons currently and it's gotten me really down.

I will return to this in another form or find a way to integrate it into a show or other context but for now it is on hold as a busking project. 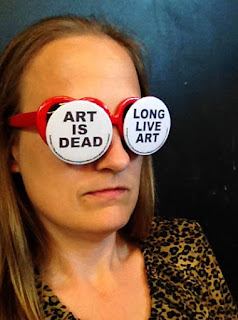 Posted by ChaoticBlackSheep at 8:52 PM No comments:

I performed for the second time briefly over lunchtime today from 11 AM - 12:15 PM.  I was told it was "an interesting project" by one passerby, and another whom I spoke with at length as I was packing up to go voiced that he felt art is dead.  As an overall it seemed that people noticed me but were rushed with work and preparing for the holiday weekend so my timing may not have been great as far as connection.

I am going to integrate another component in this project and create a very open-ended but intently focused hyper-abbreviated survey to engage with people in more ways so the end result reads more as a performance event calling for active participation and offers more opportunity for commentary on viewers' behalves.  I shall post the survey responses anonymously here.

Here are a couple of photos from today.  I did get a more involved response on the part of a couple of people, and a couple more who spent more time with it reading the poster but not conversing, so I think adding another element can help. 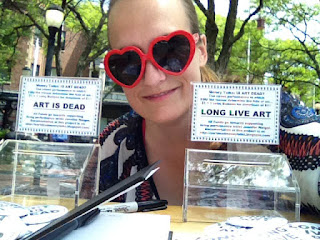 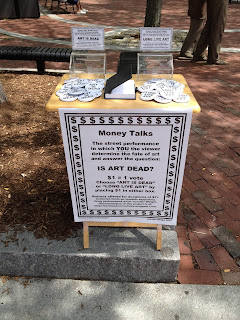 Posted by ChaoticBlackSheep at 12:06 PM No comments:

I debuted my busking project today in Davis Square from 11 AM - 1 PM.  I received a lot of notice but people did not interact with me directly, though I overheard one passerby mutter, "I've heard of that."  (I'm not sure I know what he meant, or if he himself does...)  Despite not getting the crowd response I may have desired, or any funds, I still think the performance was successful and provides some insights into the discourse I am seeking to spawn with this project.

I am keeping an ongoing log of how performances went, things to look into & consider, improvements and more.  I am looking into some events I can try to perform at in which more of the art community will be involved.  I am also planning to return to Davis Square on a semi-regular basis to build recognition in the hopes that people will open up to me over time; many passersby walked past more than once and I think given time will open up. 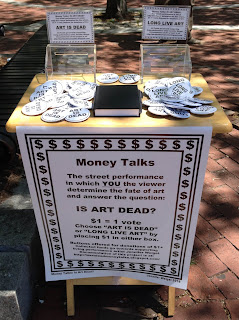 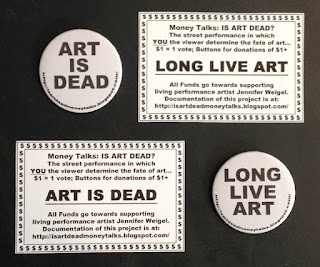 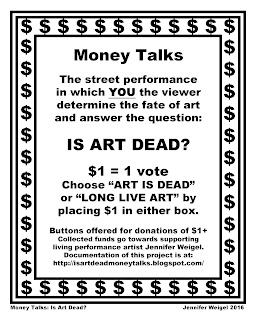 Posted by ChaoticBlackSheep at 5:31 PM No comments:

Interaction encourages dialogue and invites participation to determine the importance of money in the arts and to reflect on what we identify as art. This is meant to facilitate conversation more than provide answers to these questions, to leave the audience pondering their role and how their involvement can foster or discourage the arts by what they support financially, what they see, and how they act in response.

This project began in July 2016 as a series of performances in which Weigel performed outdoors on the streets to collect money in response to the question "Is Art Dead?" Performance participants choose whether to answer, "Art Is Dead" or "Long Live Art" by placing cash in the appropriate receptacles, receiving buttons proclaiming the same in response for cash given of $1 or more. These performances failed miserably, or perhaps the lack of participation itself was the answer given by the audience at the time...

ChaoticBlackSheep
I am a predominantly conceptual artist working in a variety of media and techniques, including performance & installation art, assemblage, video, fiber, drawing and more. I explore many different themes and ideas in my work, including environmental concerns, institutional critique, feminism, identity issues and so on.

Other Websites Featuring My Work